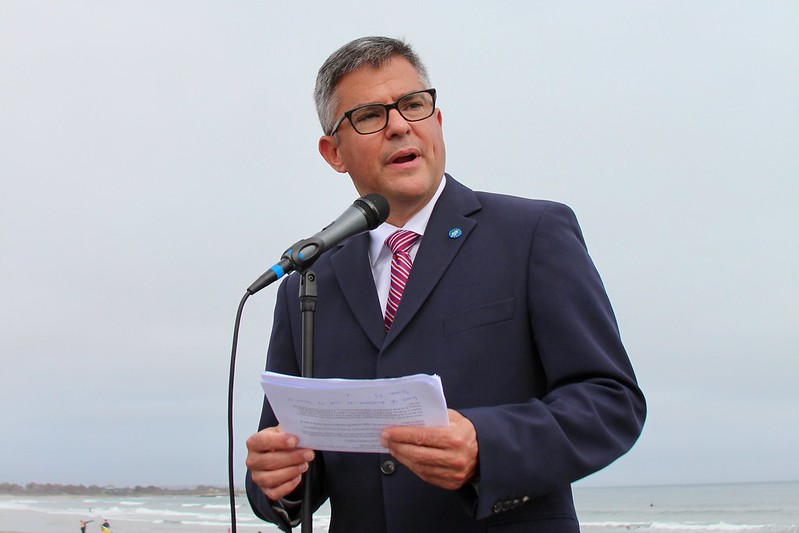 In February the Pi II class was introduced to 2020’s theme of “Come Together”, and combating aloneness within Rhode Island through their LIA projects. Little did anyone know that just one month later the world would be grappling with a pandemic that would ultimately exacerbate feelings of aloneness for so many.

Eight months later, the Pi II’s came together once more to celebrate their commencement, trading the indoor backdrop of The Towers for the outdoor backdrop of Narragansett Bay. With the waves crashing behind him, Class Speaker Tom Baldwin shared these words with his classmates:

Good afternoon and welcome to the Pi II graduation ceremony. I am very proud to be here today as your class speaker. To be accorded this role, by my peers, is truly an honor. Thank you. I am humbled by the tremendous responsibility to deliver an inspiring, meaningful, and thoughtful speech. This was by no means an easy task. I was advised, “If you aren’t naturally funny, then don’t try to be.” Trying to capture the essence of our 10-month experience was difficult, but adding a pandemic, economic meltdown, racial injustice movement, and contentious presidential election season made this task more daunting. Where to begin? I will start with a poem.

The moon now rises to her absolute rule, And the husbandman and hunter Acknowledge her for their mistress.

Asters and golden reign in the fields And the life everlasting withers not.

The fields are reaped and shorn of their pride But an inward verdure still crowns them;

And nought disturbs the serious life of men. But behind the sheaves and under the sod

There lurks a ripe fruit which the reapers have not gathered, The true harvest of the year—the boreal fruit

Which it bears forever,

With fondness annually watering and maturing it. But man never severs the stalk

Which bears this palatable fruit.

David Henry Thoreau was born on July 12, 1817 in Concord, Massachusetts. (2) During his formative years, he developed a fascination for nature that would heavily influence his writing. His essays, books, and poems made an important contribution to American literature during the nineteenth century that also shaped New England transcendentalism, a philosophical movement that examined the relationship between nature and human existence. (3)

As a writer during the Romantic period, his works emphasized the individual, focused on emotion, elevated aesthetic beauty, and glorified nature. As a transcendentalist, his works had a pragmatic quality that enabled real social change.

Thoreau’s vivid imagery and evocative words not only describe the autumnal setting of his poem, but his sentiment captures a strong New England sensibility that epitomizes our class and journey together. Like the moon rising to its absolute rule, we culminate our experience with this graduation ceremony. The harvest is an excellent metaphor to describe our individual growth and development as leaders this year. Month after month, we learned something new and different about our state. Whether government, education, environment, or basic needs, each session highlighted not only the complexity and challenges facing Rhode Island, but the hard work and dedication of ordinary citizens committed to making the lives of everyone in our communities better. We worked closely together, in our Leadership in Action teams, to design, plan, and execute projects with an intentional focus. In the process, we weathered setbacks, challenges, and obstacles, but remained undeterred in our quest to achieve something tangible and good.

Thoreau was well aware of how difficult New England life could be. His most famous work, Walden, published in 1854, describes his two-year stay in a cabin on Walden Pond. His solitary existence, marking passage of the seasons and being attentive to nature, helped Thoreau cultivate his inner self. He hoped the lessons and insights would appeal to “…the mass of men who are discontented, and idly complaining of the hardness of their lot or of the times, when they might improve them.”(4) While prized for its focus on natural beauty, Thoreau’s work served as a practical guide for living. Nature was not just a thing to be admired or passively enjoyed, it had an immanence. Nature allowed a person to connect with the divine. He believed it possessed restorative qualities that enabled human insight leading to self-reliance and higher laws for living. (5) While Thoreau’s philosophical approach enabled human autonomy, he was consciously aware that the individual had an obligation to serve society.

During his lifetime, the United States embraced the doctrine of Manifest Destiny, a period of rapid industrialization and Western expansion. The United States was coming into full bloom, but it faced a reckoning with slavery. In 1854, Thoreau wrote “Slavery in Massachusetts” in response to the state’s decision to return runaway slave Anthony Burns to Virginia under the Fugitive Slave Law. (6) Thoreau championed the abolitionist movement, served as a conductor on the Underground Railroad, and spoke out against immoral government policies and social injustice. He railed against the collection of tax dollars to support and maintain slavery and he encouraged others to help starve the Southern economy, even at the risk of causing wider financial hardship.(7) In defiance, Thoreau was once jailed for failing to pay a poll tax, an act the late-Congressman John Lewis would no doubt appreciate as “good trouble.” Thoreau believed an individual’s moral compass ought to guide social change by rooting out wrongful practices and institutions. His thoughts and ideas about society, governance, and civic activism would later inspire other leaders like Mohandas Gandhi and Martin Luther King Jr. (8)

Returning to Thoreau’s poem for a moment, the harvest is collected each year because the plants and trees continue to grow, mature, and bear fruit or seed. The trunk becomes thicker and sturdier. The branches extend farther. The limbs are more full of leaves. What happens underneath the soil is vitally important; the network of roots expands and deepens, which help to anchor the trees and plants more firmly. Another philosopher used this idea as a metaphor for social change in her own time.

In 1943, French activist Simone Weil wrote The Need for Roots. As a Jew, she was fortunate to evade Nazi-occupied France and escape a certain death sentence by fleeing to England. As a refugee, Weil was acutely aware of being uprooted from her homeland and fellow citizens. She wrote, “A human being has roots by virtue of his real, active, and natural participation in the life of a community, which preserves in living shape certain particular treasures of the past and certain particular expectations for the future.” (9) Being rooted or grounded metaphorically was crucial to her survival. She observed that having strong family, communal, and social ties resulted in a greater sense of belonging and empowerment.

Conversely, dislocation could produce feelings of isolation and apathy. Disconnection from the social world has a corrosive effect on the psyche and weakens the essential bonds that hold a community together.

Aloneness is a topic with which we are all too familiar. Not only was it the subject of our projects, but many of us felt its effects as the pandemic set in and forced us into isolation. Little did we know at the beginning of our class year that we would have to personally confront the very thing we were trying to solve. In The Lonely City, author Olivia Laing asked, “What does it feel like to be lonely? It feels like being hungry: like being hungry when everyone around you is readying for a feast. It feels shameful and alarming, and over time these feelings radiate outwards, making the lonely person increasingly isolated, increasingly estranged.” (10) Hunger can present itself in psychological and emotional ways that are often hard to detect physically.

Though physically uprooted, Simone Weil was not alone. She remained rooted to her community by maintaining a strong connection with the French resistance. Echoing Thoreau, Weil felt it was her duty and obligation to stand with her people against tyranny. That sense of purpose allowed Weil to remain hopeful in the midst of forces actively tearing her world apart. She wrote, “The future brings us nothing, gives us nothing; it is we who in order to build it have to give it everything, our very life. But to be able to give, one has to possess; and we possess no other life, no other living sap, than the treasures stored up from the past and digested, assimilated and created afresh by us.” (11) Again, the food analogy creates a powerful image and impression. Living in a time in which people survived on meager rations, food was a precious commodity that needed to be protected and shared. Weil believed rights and freedoms cannot exist without obligations. The former are grounded in the latter. In order for society to function properly, citizens must participate by feeding the needs of the soul and taking care of one another. Again, the language is reminiscent of Thoreau: we each collect experiences, store up knowledge, and use our wisdom to create things, to help serve others. We are the boreal fruit that feeds and nourishes.

It is easy to look at this world and feel totally overwhelmed at times. When it comes to helping others and getting involved in the community, it is natural to feel paralyzed by not knowing where to start. We doubt whether our efforts will make a difference. We convince ourselves that we only have so much time or money to help others outside our immediate circle. I learned this year that small impacts can produce big effects. Combined efforts can be magnified to create profound and meaningful change. As a class, I am very proud of what we’ve accomplished together. As Jane Nugent noted, our individual projects are unique in terms of size and scope, but viewed collectively, our class created a beautiful mosaic.

Sharing this journey with you has meant everything to me during this very challenging time. When I was hungry, you sustained me, made me feel full, and gave me the energy to give of myself to others. Olivia Laing wrote, “We are in this together, this accumulation of scars, this world of objects, this physical and temporary heaven that so often takes on the countenance of hell. What matters is kindness; what matters is solidarity. What matters is staying alert, staying open, because if we know anything from what has gone before us, it is that the time for feeling will not last.” (12) Now is a time to celebrate together, by the warm glow of our accomplishments and time together will cool with time. Let us not allow the flames to go out.

If you remember nothing from this speech today, then take a moment right now to think about this experience and what it meant to you. In this moment, reflect and ask yourself these questions. How are you half full? How have you changed? What did you learn? How will you continue to grow? Who can you feed? What you do does make a difference. If we manage to stay connected and continue to work together, by spreading our roots and tying them together, then we can create a orchard large enough to feed the world. Thank you.