Roberta Richman: Making a difference in a tough place

Roberta Richman (LRI '90) has served Rhode Island for over three decades through her highly accomplished career at the Department of Corrections. 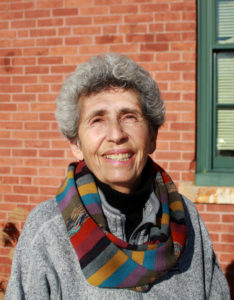 Chances are good that when you hear “prison warden,” you envision someone more like the heartless Samuel Norton from the movie Shawshank Redemption than the compassionate Mother Theresa. Yet, the latter more aptly describes Roberta Richman (LRI ’90), who spent a decade as warden of Rhode Island’s women’s prison.

Richman, warden and then Assistant Director of Corrections, promoted a more humane approach to corrections in Rhode Island. She will receive an ‘Acts of Leadership’ award at Leadership Rhode Island’s annual luncheon March 19.

Richman’s journey into the world of corrections began, accidentally, more than 40 years ago when she, then an aspiring professor of arts, realized that the prospects of a long-term college teaching position were growing slim. So, like she would do so many times in the years to follow, she adjusted her plans, and began taking psychology classes with the intent of launching a career in art therapy.

Before long, she was presented with an opportunity to be the coordinator of an arts program for inmates at the Adult Correctional Institutions. After a series of similar roles over the course of a couple of years, Richman was appointed Administrator of Educational Services.

“By this point, I loved being at the prison,” shared Richman during a recent conversation. “I thought it was a really good fit for me, as strange as that may sound, and I never felt threatened.”
In 1990, Richman was asked to take the helm of the women’s prison facilities, where others — most notably her superiors — soon began to recognize the value of her approach to leadership and prisoner interaction.

Richman says she “always felt like I could make a difference” even though her personality did not comport with the expectations of a tough disciplinarian. “It’s just not who I was.” Over the years, the harsh realities of prison life hardened her personality, but, she says, she never let go of her core values.
Richman spent the balance of her career championing the belief that prisoners are human beings who need incessant support, not punishment.

She applied that belief to the inmates under her supervision, and also worked relentlessly to shape the public’s perception of what the incarcerated need, especially after they are released. She worked with community leaders, small business owners, community healthcare agencies, and others to create support systems that would help prisoners succeed when they re-entered life on the outside.

“We have to constantly remind ourselves that prisoners aren’t just the bad thing they did, they’re human beings who often just want a chance to do the right thing. So, the real battle begins when they re-enter the community and the walls in the community don’t let them in.”

Proud of what she accomplished, Richman retired in 2012 after 33 years of service in the state’s prison system. She has penned several opinion pieces and has offered expert testimony about controversial prison topics, like solitary confinement and life without parole for juveniles. In her retirement, Richman has served on the boards of several non-profits, and is currently leading the Welcome House of South County as Interim Executive Director.

On rare occasions, you might find her in Wakefield’s Hera Art Gallery, which she helped launch in 1974. And hardly a day goes by without some time playing the piano or enjoying her grandchildren, in whom she no doubt — sees great potential as human beings.

Tickets to the 2020 Annual Inspiring Leaders Luncheon, where Roberta will be honored, are available here.