During an eye-opening tour of one of Crossroads Rhode Island’s temporary emergency shelters in Providence, Lisa Monti, a participant in Leadership Rhode Island’s 2021 Core Program, came up with an idea for how she could make a small, but meaningful, difference.

She was impressed that the shelter residents had new cots, donated when the state closed a Covid-19 field hospital, but she was unsettled when she saw the shelter guests “using tee shirts or towels, sometimes damp towels, to cover their pillows.”

That basic need “seemed like a really easy thing for me to try and address,” says Monti, a vice president and senior marketing manager at Citizens Bank.

By pledging to increase the pillowcase inventory at Crossroads, Monti was entering into a Social Contract, the first phase of her Leadership in Action (LIA) project requirement.

The introduction of social contracting emerged as an option back in the dark days of Covid-19 shutdowns and social distancing, when Jane Nugent,’95, longtime LIA project advisor, was trying to figure out how the then-upcoming 2021 Rho II class members could best pull off their LIA projects.

Given the uncertainty of when pandemic restrictions would be lifted to allow direct social interactions among the Rho IIs, she came up with a two-step approach which “suited the circumstances.” In doing so, Nugent was drawing from a social change theory she came across during her 21 years managing community-based projects for United Way.

It was expected that the individual social contracting phase would dominate the first half of the class year and the traditional team projects would launch as soon as the easing of Covid restrictions allowed the resumption of in-person gatherings.

In January 2021, Nugent briefed the Rho IIs on the new approach: You are divided into project teams, but think of your Social Contract as a commitment that only you make and you control. It should be a task that makes an impact, albeit a small one, and it should be one that is deliverable in a relatively brief period of time.

By sharing progress on their Social Contracts with their teammates, the theory suggests that overlapping themes or interests might lead to consensus on an eventual team project that could be completed in a short time frame.

In another departure from past LIA projects, the Rho IIs were urged to look for inspiration from what they learned or observed during one or more of their first four session days: Economic Development, Education, Government, and Basic Needs. In past years, team projects addressed an overall theme; in 2020, for example, the theme was Loneliness.

Monti’s epiphany at Crossroads turned into her Social Contract after the need for more pillowcases was confirmed by Laura Calenda ’11, the organization’s chief marketing and philanthropy officer. On the day of the LRI visit, pillowcases were being laundered, one of the many daily Covid-related precautions at Crossroads. 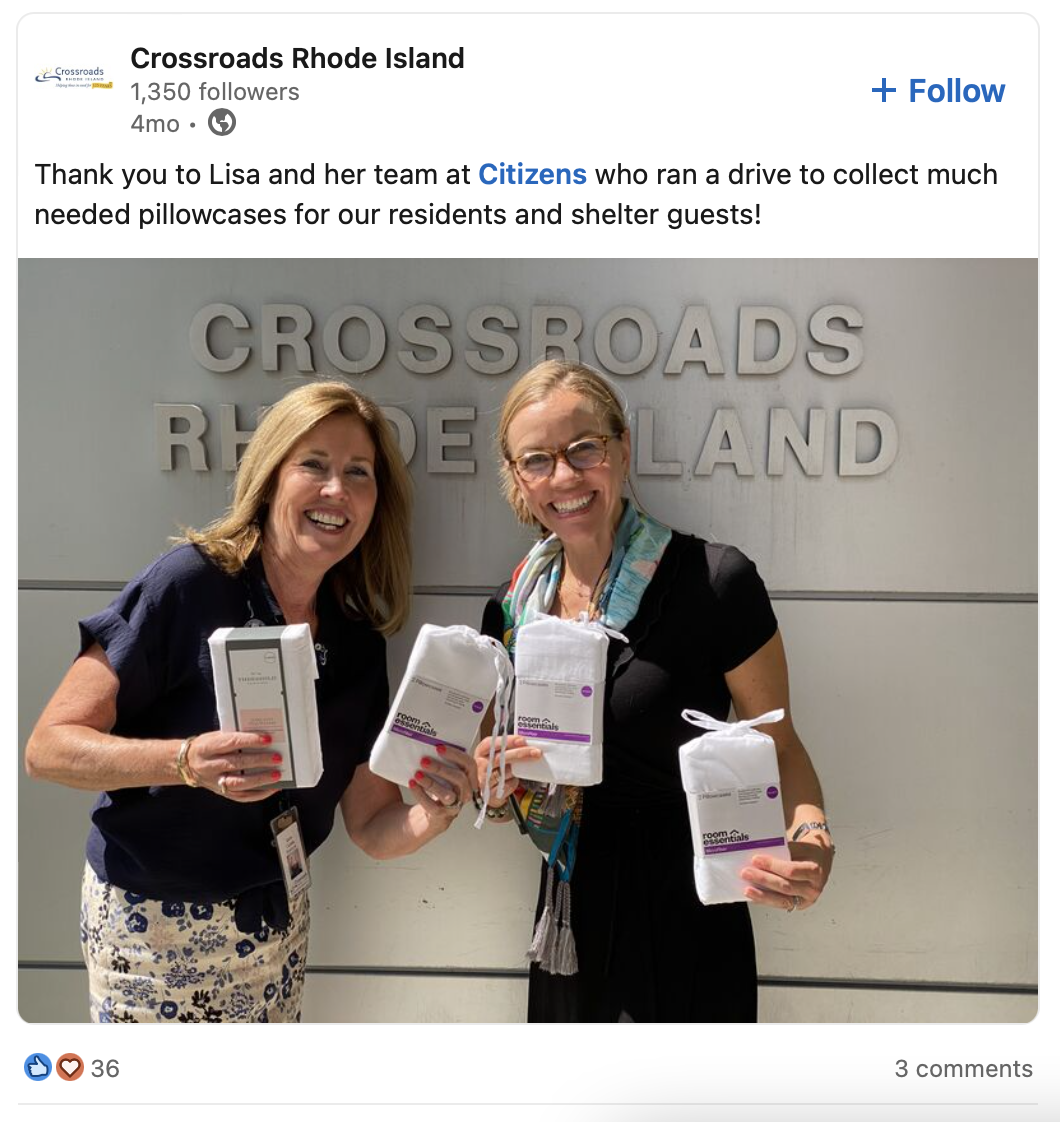 Lisa Monti ’21 making a delivery of 300 pillowcases to Crossroads Rhode Island as part of her social contract.

Word of Monti’s effort rippled through the Rho II class, her Citizens Bank colleagues, and even her husband’s company, Fall River Manufacturing. She generated enough support to deliver nearly 300 new pillowcases to Crossroads in August.

The 75 Rho II Social Contracts ran the gamut of efforts – from volunteering, to clothing drives, to more regularly supporting local businesses, to becoming a mentor – with nearly half reporting they had fulfilled their contracts by graduation in October. Thirty-five percent reported their contracts as partially completed.

In June, when attention turned to team projects, the team Monti was on jumped at the idea of expanding on her pillowcase drive, with their first instinct to gather more bedding supplies, like sheets.

But when Monti and team member Seta Accaoui, an attorney, checked with Crossroads, they learned of a basic need that donors rarely, if ever, think of: men’s, women’s and children’s underwear.

Though they have all graduated, team members remain committed to hosting a social gathering of the Rho II class in 2022. The price of admission: a new pair (or more!) of underwear.

They also delivered during their class year by adopting a family through Sojourner House, a service provider for victims of domestic and sexual abuse, another site visited by Rho IIs on the Basic Needs session day. Over the holidays, a mother and five children received $400 in gift cards to several stores, including Target, Walmart and Stop & Shop.

Two other teams were struck by what they saw during the Basic Needs session day, and that shared experience lit the way for their group projects. Each team’s project combined the desire to fill a basic need with take-aways from another session day.

Members of one team shared their frustrations over the inequities they witnessed during their Education session day, and it just so happened that each of their social contracts focused on basic needs.

“So we took those two ideas, and we put them together to work on our project,” explains Karen Smolar, a lawyer specializing in criminal legal training.

“We just wanted to feel like we could do something that was really simple that could make a difference.”

Enter team member Chantell Cuthbert, a retail manager at Blue Cross & Blue Shield of Rhode Island, who knew the perfect person to ask about the basic needs of students. That person was her cousin, Lashan O’Connor, Culture Coordinator at Central High School.

“I’m passionate; I lead from the heart; I wasn’t hired to do this job, I was called,” O’Connor says of her work to promote a positive climate within Central and to increase engagement of students.

O’Connor had no problem providing the team with a list of her students’ basic needs, starting with access to water. Yes, water. The team learned that all the water fountains in the school are broken. Other basic needs included toothbrushes and toothpaste, soap, deodorant, feminine products, even umbrellas.

“We just wanted to feel like we could do something that was really simple that could make a difference.”

A welcome crowd of Central High School students, O’Connor, the principal, and a guidance counselor were on hand in October when Cuthbert, Barclay-King and Smolar dropped off the fruits of the team campaign: 740 bottles of water and large quantities of soap, body wash and feminine products. In a separate visit, Sperry dropped off 1,500 sets of toothbrushes, floss, and toothpaste. 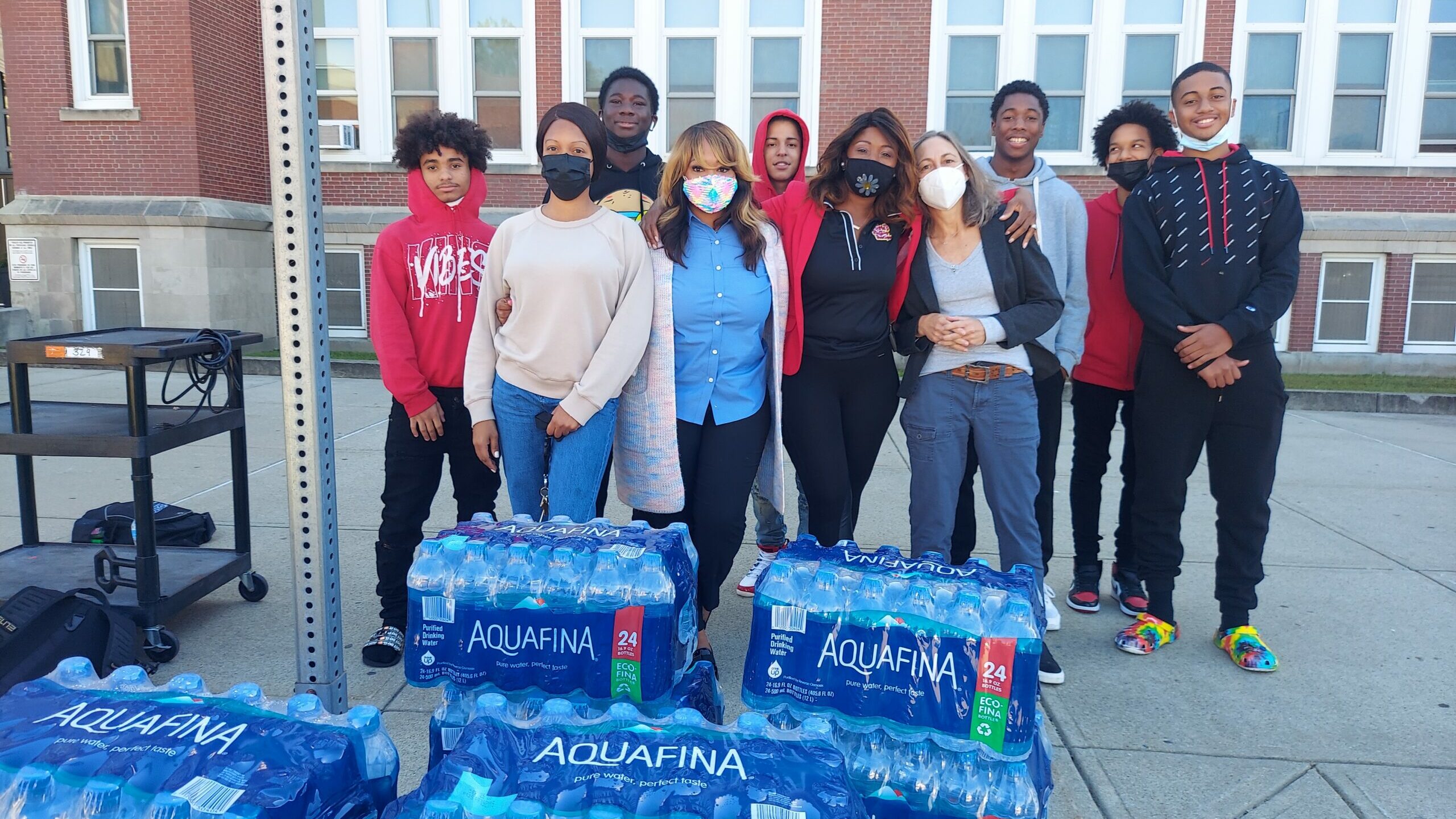 Rho II class members Chantell Cuthbert, Geraldine Barclay-King, and Karen Smolar collected and dropped off 740 bottles of water to students at Central High School, where there were no functioning water fountains.

“The kids were super excited that someone cared enough to say ‘This is for you guys.’” Cuthbert says. “One student even said, ‘Oh my god, this is all for us?’”

The team’s impact lives on. In December, Amenity Aid dropped off another supply of hygiene essentials at Central High School, and has offered to serve as a resource for the Culture Coordinators at other Providence schools.

Another team merged an interest in filling basic needs with what they learned during another session day, one that didn’t fall within the first four months, yet proved to be just as impactful.

“Crime and Incarceration Day touched our hearts, and we came up with a project to speak to that,” Dennise Kowalczyk, owner of CTD Creative Consulting, explained during the Rho II’s commencement in October during which each team did a presentation on their LIA projects.

“Crime and Incarceration Day touched our hearts, and we came up with a project to speak to that.”

Their project involved a fundraising campaign so inmates preparing for re-entry into the community could give Christmas gifts to their children.

Kowalczyk told a personal story to reinforce the significance of making positive memories through gift giving.

“I grew up in a very poor family, but somehow, every Christmas morning, we’d come downstairs, we five kids, and the tree was filled with presents. Somehow my parents were able to get gifts for us every year.”

Noting that she was overjoyed by the thought of spending Christmas with her newly-turned-adult daughter, she made sure to make space for a harsh reality.

“There are a lot of community members that don’t have access to resources to share with their children, if they choose to celebrate Christmas.”

The team heard about the challenges that surround former prisoners as they reenter the community through site visits at Open Doors, an organization that serves formerly incarcerated individuals and their families. They also learned about the Reentry Campus Program, which provides currently and formerly incarcerated individuals with an affordable pathway to postsecondary education and certification programs, and they listened to the personal stories of former inmates.

“These three experiences drove home the challenges of re-entering communities, and all those basic things that people need to do to live,” says team member Kim Bright, chief of staff for the Rhode Island Office of the Postsecondary Commissioner and executive director of the Rhode Island Nursing Education Center.

After reconnecting with Open Doors to learn what they might do to help, the team launched a holiday drive for the children of residents of a transitional facility in Pawtucket. Nearly $2,000 was raised, with teammate Richard Bernado, senior vice president at BETA Group, Inc., pulling in the bulk through his personal network.

Five of the men living in the transitional facility were able to give each of their children — 13 in all — $150 in gift cards for Amazon and Old Navy, allowing each child to select items they really need and items they really want. 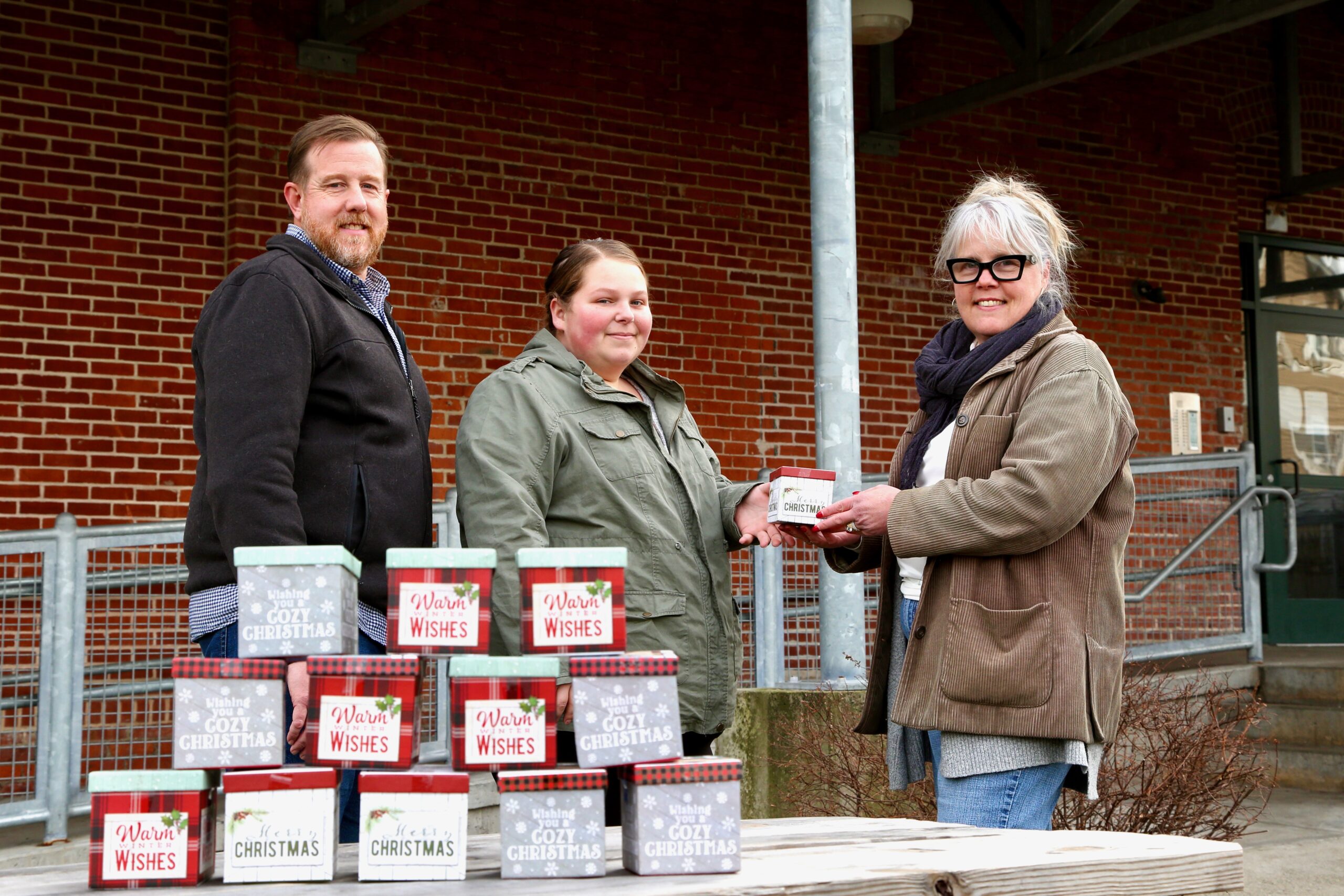 In preparing for the 2021 class, the LRI staff struggled with how to preserve the Leadership in Action experience while not overburdening core program participants already dealing with their own pandemic-related problems.

The new approach — one that accepted the realities of a pandemic that just won’t go away — reinforced some valuable lessons about scale.

“There was no expectation that any one person or group was going to change the world in 10 months,” says Kristin Zosa Puleo, LRI’s Director of Development and Alumni Engagement.

The class projects and social contracts provided convincing evidence that “a collective of small actions can make a difference,” Puleo, who, as the former Director of Programs, coordinated the 2021 Core Program, adds.

“I think in the end, what we have is a group of activated class members who not only made a difference through their social contracts and their group projects, but they continue to do so, even after graduation.”

Class member David Blair, a vice president at The Beacon Mutual Insurance Company, offered his perspective: “One of the things we learned as part of the LRI journey is that you can make a difference in small increments, and that’s important.”

“One of the things we learned as part of the LRI journey is that you can make a difference in small increments, and that’s important.”

Nugent agrees. “The moral of the story is that no matter how small or seemingly inconsequential, every individual contribution counts, and can make something, even transform something, into a workable solution.”

“Never minimize the value of performing a simple, micro action, especially in the midst of overwhelming unpredictability,” says Mike Ritz ’07, LRI executive director. The deliberate individual action, a social contract, grounds leaders and re-centers them in their own values. “It’s rejuvenating.”