Preserving Our Democracy in the Era of Coronavirus

In a democracy, government is “of the people, by the people, for the people,” but, in the era of Covid-19 and social distancing, Rhode Island’s 39 cities and towns are struggling with how to conduct governmental business with the people.

That concern prompted 291 elected and appointed officials from each of the state’s municipalities to gather in virtual space on Tuesday, March 31 to learn how local councils, committees and boards can ensure that the people are able to observe and comment at meetings when the people’s business is conducted remotely.

The full session on Using Technology to Hold Effective Public Meetings is view-able online by clicking the image above. 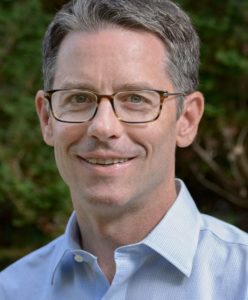 The meeting agenda included a deep dive into the Executive Order and follow up guidance from John Marion ‘11, Executive Director of Common Cause Rhode Island; special considerations for public bodies in a newly digital era led by Shawn Selleck, Providence City Clerk, and conducting online meetings and parliamentary procedure recommendations from Evan Lemoine, a consultant with years of experience in the online meeting space.

“It was clear we had all the elements necessary to make this really successful: an eager population, people with real world experience who could help out, and, of course, LRI with the technical digital convening skills and their traditional role as facilitator,” says Marion.

The virtual meeting, the first of its kind in the state, received a positive response from the body politic. “It was a great help and this information is great to have on hand; much appreciated,” Priscilla Steenbergen, Woonsocket’s Law Department Executive Secretary, responded after the session.

Thanking LRI, Common Cause Rhode Island, and the individual presenters for a “fabulous session,” Jennifer Slattery, professional development coordinator for the League of Cities and Towns, said “It was informative and acknowledged the challenge of public service beautifully. Every one of [these representatives] is a pleasure to work with and I hope our collaborations continue in the coming days.”

“We put this gathering together in response to a real community need and in a very short timeframe,” says Michelle Carr ’14, Deputy Director of LRI, who worked with the partner organizations to co-design the training session, “We’re already thinking about how we can continue this work, and bring these best practices to agencies, public boards, and commissions throughout the state.” 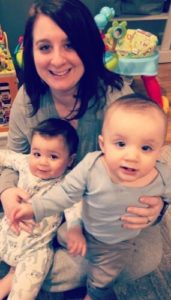 Michelle Carr, deputy director of LRI, getting her twins Edward and Emma ready for bed

Marion concurs, adding that there is an opportunity for LRI to bring this service to state governments across the country.

Carr was still processing last-minute registrations on the night before the session after performing bathing-bottles-reading rituals before tucking Emma and Edward, one-year-old twins, into their cribs for the night. Her work-at-home daytime hours are made possible with the help of another LRI connection, nanny Jackie DiChristofero, a 2017 graduate of College Leadership Rhode Island (CLRI).

If the past few weeks of gaining momentum in the e-meeting space are any indication, LRI is accelerating its activities daily. Between March 16, when LRI went virtual, and the end of the month, the organization hosted more than 800 individuals in various virtual convenings.

On Friday, April 3, the CLRI Class of 2020 participated in LRI’s first virtual program day, one devoted to Career Readiness. You are our pioneers, the people most comfortable with technology, Ritz told the participants. He also acknowledged the stress they are experiencing as they deal with online classes and face the reality that they will not get to enjoy traditional graduation ceremonies.

The core program’s Pi II Class will convene for their first virtual session, Government Day, April 24. For Kristin Zosa Puleo, LRI’s Director of Programs, the concept of pivoting to the digital space was at first a disappointment.

“Government Day is my favorite session day of the year, so when we first came to terms with the reality we were dealing with, I was a bit like a kid who finds out their birthday party has been cancelled,” says Zosa Puleo, whose two actual children aren’t in danger of missing out on their birthdays, but did just complete their second week of remote learning from home. “After I got over that initial reaction, I was actually really excited. I realized this was the perfect session to transition to the online realm.”

Government Day, in which the entire class takes on different roles to emulate the General Assembly and learns how legislation is introduced, debated and passed, with motions recognized and gavels raised. It is usually a hands-on affair held in the legislative chambers at the State House, with the opportunity to vote yay/nay on bills. The bulk of the work is done in either large gatherings or in small committees, a real-life format that can easily be transitioned to Zoom functionality.

The 2019 Omicron II class prepares for their mock legislative session on government day.

What is particularly remarkable is that the Pi II class may be leading the way for the actual Rhode Island General Assembly to convene remotely – an action urged by the legislature’s Republican minority.  Speaker of the House Nicholas Mattiello and Senate President Dominick Ruggerio responded together in late March that they are studying contingencies such as remote sessions, but neither indicated that they felt an urgent need to convene anytime soon.

With its recent focus on local government, both on making it run more smoothly and become understood more clearly, LRI doubles down on its mission of aligning organizations, fostering human connection, and making Rhode Island a stronger place in which to work and live.

As a state, our greatest strength has never been our size or our stature. It has always been our people. And right now, our people are at risk. The darkness of the virus is ever present, and the effects of this disease are landing closer and closer—as of April 3, Rhode Island had 711 cases  and 14 Rhode Islanders had perished. Livelihoods have been disrupted, loved ones have been separated, and life as we know it has been upended.

Each week of this crisis unveils a new layer of our collective need to come together even while apart. Perhaps of the people, by the people, for the people is not just the phrase at the cornerstone of our democracy. Perhaps it is also the phrase that, once we emerge from behind our screens and step foot outside of our homes, will rally us to action as we rebuild what we have lost.